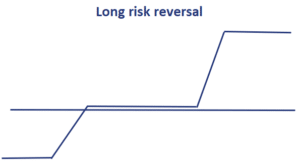 On this page, we discuss the often-observed patterns in the relationship between implied volatility and the strike price. Next, we explain how traders can exploit deviations that are expected to correct using a risk reversal strategy.

Holding expiration date constant, there are two often-observed patterns in the relationship between implied volatility and strike price:

Deviations in the skew from historical levels can be used to draw conclusions about market sentiment:

These are the kinds of temporary deviations that risk reversals strategies try to exploit.

Let’s consider an example. Imagine a trader believes that put implied volatility is relatively too high, compared to that for calls. In that case, a long risk reversal could be created by:

Both options would have the same expiration. This would create a broadly long exposure to the underlying, which would be problematic. The positive exposure comes from the positive delta from the long call and the short put.

The aim of the strategy is to make money if the anomalous relationship among the implied volatilities corrects. The strategy is not aiming to take a directional bet. Thus, we have to hedge the net long exposure we have. This can be done using a delta hedge. In this case, we would short the underlying stock.

Note that the delta of the risk reversal will change and the size of the hedge will have to be changed. Changing the hedge ratio over time is called dynamic hedging.

We discussed the basics of risk reversal strategies. These strategies try to exploit temporary deviations in the observed relationship between strike price and implied volatility.