On this page, we discuss both sources of risk and then discuss the formula as well as an approximation to convert the returns to domestic currency returns. At the bottom of the page, an Excel spreadsheet is available for download.

First, let’s discuss the two sources of risk that follow from investing in a foreign asset priced in a foreign currency:

These two kinds of return are multiplicative.

This approach is acceptable when precision is not needed. In both cases, it is important to use the foreign currency expressed in the base currency (the denominator) to calculate the change in the value of the currency.

Let’s conclude with a numerical example of how to convert the return in foreign currency in domestic currency. The following table implements the necessary steps. 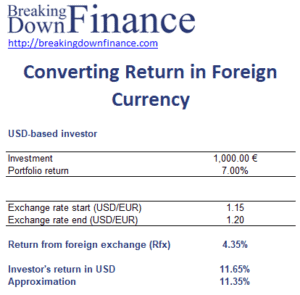 The spreadsheet is available for download at the bottom of the page.

We discussed how to convert a return in a foreign currency to a return in domestic currency. There are two approaches that an investor can use, depending on the level of precision required.

Want to have an implementation in Excel? Download the Excel file: Converting Return in Foreign Currency Example