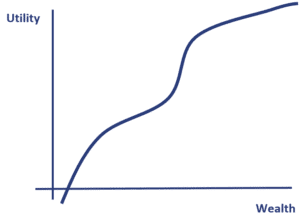 On this page, we discuss the Friedman-Savage utility function and how the individual behaves on different points of the utility curve.

The solution is that individuals are reference dependent. This means that risk evaluation is influenced by the individual’s wealth and personal circumstances.

Let’s consider an example in which an individual is faced with two gambles. The gambles are indicated on the figure.

The shape of the utility function drives this result. Point B is the inflection point, where the individual’s behavior moves from risk-averse to risk seeking. Between points A and B the individual is risk-averse. Between B and C he or she is risk-seeking. Beyond point C, the investors are exhibiting risk-averse behavior again.

We discussed the Friedman-Savage utility function which tries to explain why people can be risk-seeking and risk-averse at the same time for different gambles (e.g. buying lottery tickets and taking fire insurance).