The average daily trading volume calculation is very straight forward. In particular, all we need is historical data on the daily volume (i.e. number of shares) of a security. Suppose

is the daily volume at day t. Then the n-day ADV equals

In practice, the 30 day average volume is used as a proxy for a stock’s liquidity. Thus, an n equal to 22 (the number of trading days in a month) is used by most fund managers. 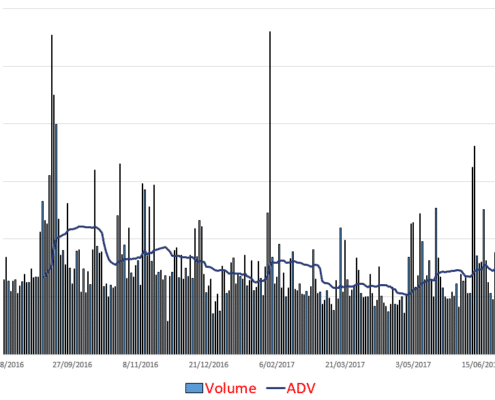 When investors use ADV, they will actually compare the ADV to the size of the position they want to trade. Often, a trade will be called high-touch or low-touch. A trade is considered high-touch is when the trade exceeds 5% of the daily average volume. Trades below 5% of ADV are considered low-touch.

In other words, the larger the size of the trade relative to the ADV, the more difficult it will be to trade the position. This is because larger trades impact security prices. This market impact will cause prices to go up (down) in the case of a purchase (sale). This will have an adverse impact on performance.

We discussed the Average Daily Volume. It is a measure used by fund managers to gauge whether or not trading a position will have a big impact on prices. The higher the ADV, the more liquid a security.