The certainty equivalent (CE) is the maximum amount an individual would be willing to pay to participate in an event with uncertain outcomes. The certainty equivalent is a very important concept because it can be used to determine whether people are risk-averse, risk-neutral, or risk-seeking. In principle, investors are expected to be risk-averse. 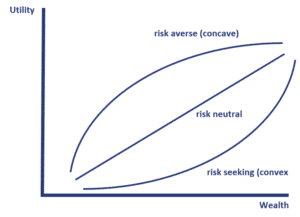 On this page, we discuss the CE and how it can be used to determine whether someone is risk-averse, risk-neutral, or risk-seeking.

To determine whether investors are in fact risk-averse, we can use certainty equivalent returns. This is the amount of money a person is willing to pay to participate in an investment with an equal probability of the investment paying back immediately $50 or $100. Thus, the investment will pay back on average $75. That’s the CE.

Now, let’s consider a number of examples. Suppose a person is risk-averse. this means that he or she will suffer a greater loss of utility for a given loss of wealth than they gain in utility for the same rise in wealth. Thus, they would be willing to pay LESS than $75 for an uncertain but expected pay-off of $75. In this case, the certainty-equivalent is LESS than the expected value.

Next, let’s consider a risk-neutral person. This person experiences the same utility whether he gains or loses a given amount of wealth. Thus, he or she would be willing to pay the expected pay-off of $75. Thus, the certainty equivalent EQUALS the expected value.

The shape of the utility function of wealth in all cases are illustrated in the figure.

We discussed the CE. It is the amount people are willing to pay to participate in an event with uncertain outcomes.