A bond portfolio manager can examine multiple markets and expected changes in each yield curve to select the optimal strategy. Such strategies may also be constrained to zero duration and zero net cash invested long/short approaches. These strategies are called intermarket curve strategies.

On this page, we discuss a number of basic inter-market strategies. We also illustrate these concepts using a simple duration and currency neutral intermarket curve trade example.

First, we discuss different ways to set up inter-market strategies.

Next, let’s have a look at the following example. Based on the following yield curves, we will identify the appropriate duration and currency neutral curve strategy: 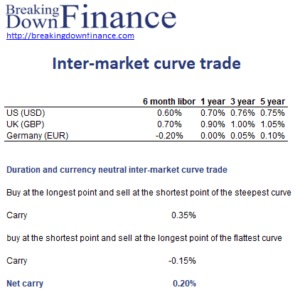 Note that this strategy has no net currency exposure because we are both long and short of the foreign currency. We also neutralize the positive duration exposure by buying at the shortest point and selling at the longest point of the flattest curve to minimize the carry lost.

We discussed a number of simple inter-market curve strategies that bond managers use.

Want to have an implementation in Excel? Download the Excel file: Intermarket curve strategies example