A Variance swap its payoff is based on variance. They are referred to as swaps because these contracts have two counterparties, one making a fixed payment and the other making a variable payment:

On this page, we discuss how variance swaps work, how the settlement amount can be determined and finally how we can value variance swaps mark to market. We also implement a numerical example using Excel. The spreadsheet is available for download at the bottom of the page.

There is no exchange of notional principal at the initiation of the swap. The swap also has no interim settlement periods. With such a swap, there is a single payment at the expiration of the swap based on the difference between actual and implied variance over the life of the swap:

where Nvar is the notional variance. The value of a swap is zero at initiation because implied volatility is the best ex ante estimate of realised volatility.

If, at expiration, realised volatility:

If we have N days of traded prices, we can compute N-1 price relatives R:

The following table illustrates how we can calculate the profit or loss on a swap at settlement of the swap. The spreadsheet can be downloaded below. 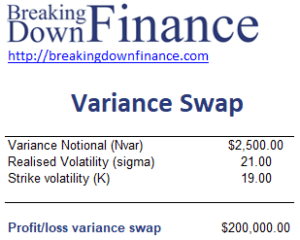 We discussed the basics behind variance swaps. We discuss how to mark to market these swaps separately.

Want to have an implementation in Excel? Download the Excel file: Variance Swap example