On this page we discuss the Vasicek interest rate model, discuss the model calibration, and finally provide the Vasicek model in Excel. The Excel spreadsheet can be found at the bottom of the page.

The model can be summarized in a single formula that describes a short-term interest rate’s behaviour. The Vasicek formula

where Wt is a Wiener process that describes the market risk factor. First, we have the standard deviation sigma, which sets the volatility of the short-term interest rate. Next, we have the parameters a and b. These, together with sigma and the initial condition rt, describe all the dynamics in the model. But how should we interpret a and b?

The interpretation, assuming a is not negative, goes as follows:

Finally, there is also an important ratio we can derive from the model

This ratio measures the degree of long-term variance. All price paths of the interest rate will revert around the long-term mean with this degree of variance.

Looking at the model, we should note that it is a mean-reverting model. This makes sense, since interest rates cannot go up indefinitely and do not go below zero for long periods of time either. Instead, interest rates tend to revert back to certain ‘natural’ levels. This is the big contribution of the model.

The Vasicek calibration is an important aspect of the Vasicek interest rate model. To calibrate the model, analysts typically perform a simple ordinary least squares (OLS) regression using actual daily interest rate data. This is needed to determine a, b, and sigma in the model.

In the Excel spreadsheet at the bottom of the page we implement the necessary routines to apply the model. The Vasicek model calibration is not discussed, but can also be don using Excel’s solver features. Finally, we note that using the simulated interest rates, it is very easy to use the model to determine bond prices. The following figure illustrates how interest rates can be simulated using the model. 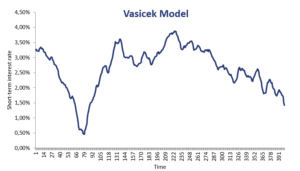 We discussed a short-term interest rate model that is mean-reverting.

Want to have an implementation in Excel? Download the Excel file: Vasicek Model template