M&A Industry Life Cycle Analysis argues that industries go through certain phases based on the industries’ rates of growth. The life cycle stage may attract companies that wish to merge or acquire the company.

The motivations that a company may have for entering into a merger and the type of merger will depend to a large extent on what phase of the industry life cycle the company is currently in. 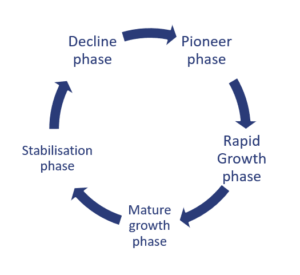 On this page, we discuss the different industry life cycle phases and motivations for M&As in each stage.

In the first phase, the so-called pioneer phase, it is generally still uncertain whether consumers will accept a firm’s product or service. Such an industry typically has large capital needs to fund development, but is not generating profits.

In this stage, younger, smaller companies may seek to sell themselves to larger more mature companies that have very big budgets and want to find a new growth opportunity, or the smaller companies may merge with a similar firm that will allow both companies to share management talents and financial resources. As a result the common types of mergers seen in this stage are conglomerate mergers and horizontal mergers.

The second phase is the rapid growth phase, which is characterized by high profit margins and accelerating sales and earnings. The product or service provided by the company is accepted by consumers, but there is little competition in the industry.

In the mature growth phase, new competition has reduced industry profit margins, but the potential still exists for above-average growth. Merger motivations are generally focussed on operating efficiencies as companies seek to generate economies of scale to reduce costs to keep profit margins high. As a results, horizontal and vertical mergers that provide synergies and expand market power are most common in this phase

In the stabilization phase, competition has eliminated most of the growth potential in the industry, and the rate of growth is in line with that of the overall economy. Companies in this phase seek mergers to generate economies of scale in order to compete with a lower cost structure. They may also acquire smaller companies that can provide strong management and a wider financial base.

In this phase, horizontal mergers are the most common as the strongest companies acquire the weaker companies to consolidate market share and reduce costs.

The final stage in an industry is the decline phase. The decline phase is characterized by overcapacity, declining profit margins, and lower demand as consumer tastes may have changed and they seek new technologies.

In this stage, all three types of mergers are common. A company may seek a horizontal merger simply to survive, vertical mergers may be used to increase efficiencies and increase profit margins, and conglomerate mergers may occur as companies acquire small companies in different industries to try to find new growth opportunities.

We discussed the M&A Industry Life Cycle Analysis. Depending on the life cycle of the industry, the type of M&A will differ considerably.