CEOs often cite a wide range of motivations for M&A (M&As). Some of these reason are economically founded, while others are not. Investors and shareholders should carefully assess the motivations for a merger. There may be several merger-motives at the same time and the motives may be related. 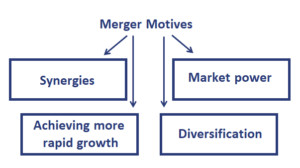