In any merger that makes economic sense, the combined firm will be worth more than the sum of the two separate firms. This difference is the gain, which is a function of synergies created by the merger and any cash paid to shareholders as part of the transaction. Takeover bid evaluation is an approach investors and analysts can use to evaluate a bid.

In equation form, we can denote the post-merger value of the combined company as follows:

Let’s discuss the gains accrued to the target and the acquirer.

Gains accrued to the target

Gains accrued to the acquirer

Acquirers are willing to pay a takeover premium because they expect to generate their own gains from any synergies created by the transaction. The acquirer’s gain is therefore equal to the synergies received less the premium paid to the target’s shareholders:

where Gain A are the gains accrued to the acquirer’s shareholders.

Not that in a cash deal the cash paid to the target shareholders (C) is equal to the price paid for the target (PT).

In addition to the price paid, the ultimate gain to the acquirer or the target is also affected by the choice of payment method. Mergers can either be financed through cash or through an exchange of shares of the combined firm. The chosen payment method typically reflects how confident both parties are about the estimated value of the synergies resulting from the merger. This is because different methods of payment will give the acquirer and the target different risk exposures with respect to misestimating the value of synergies:

where N is the number of shares the target receives and PAT is the price per share of the combined firm after the merger announcement.

Next, let’s discuss a numerical example of how to evaluate a takeover bid. The following template implements the above approach: 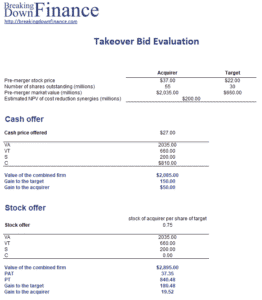 The Excel spreadsheet is available for download at the bottom of the page;

We discussed how to evaluate a takeover bid from the acquirer’s and target’s perspective.

Want to have an implementation in Excel? Download the Excel file: Takeover bid evaluation tool